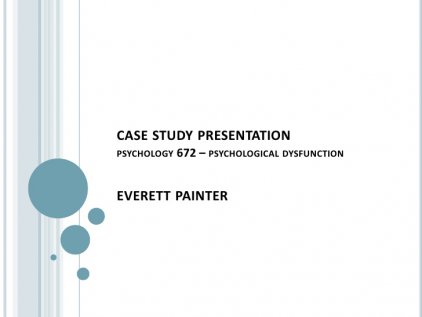 The one session trauma treatment man:

An HGV driver was involved in a serious road traffic accident, in which the vehicle turned over onto its side, and continued to travel along the road. The driver was convinced that he was going to die as his head was only inches from the road. He was referred to me 18 months or so after the event and he was low in mood, irritable, and preoccupied with that moment in his cab. He could not stop thinking about his wife and two children and he would have brief involuntary images of them alone, without him. He had not returned to his old lifestyle and could not think of the future. He agreed that a part of him had not accepted that he had survived.

I encouraged him during the assessment to think through carefully what would have happened had he died, and I guided him through the images of the news being broken to his family, the funeral, and the time beyond. This may sound cruel, but the preoccupation was maintained by these personally taboo ideas for him. He appeared calm at the end of our meeting. At the next appointment his mood had normalised, and all other symptoms had gone or were diminishing. He appeared brighter, relaxed and he told me that the accident was now behind him.

Unfortunately most treatments are not so brief and straightforward, but my experience told me that an effective solution was available at the first appointment.

The young woman who was afraid of men:

An attractive woman in her mid 20s had never had a boyfriend. In spite of previous therapies, she remained severely anxious about being near men of her own age. She avoided going out to pubs, bars, or parties. Using cognitive therapy we looked at some unpleasant early encounters with boys, and ideas she had about herself and how she believed she came across to lads. We systematically looked at the accuracy of her thoughts, and she saw that there were alternative...

The case for compassion at the heart of clinical ...

The American Indians into Psychology (AIIP) Program was founded in 1999 by John Malcolm Chaney, Professor of Psychology at Oklahoma State University. AIIP supports the education of Native American students in psychology in a number of ways. It provides outreach and...

Ronnie Gilbert (born September 7, 1926) is an American folk-singer. She is one of the original members of the Weavers with Pete Seeger, Lee Hays, and Fred Hellerman.
The Weavers were an influential folk-singing group that was blacklisted in the early 1950s, during a...

Mohan Agashe is an Indian theatre and film actor. He was awarded the Sangeet Natak Akademi Award in 1996.
He is a psychiatrist by profession and works as a Professor of Psychiatry at the B. J. Medical College and Sassoon Hospital in Pune, India.
Dr. Mohan Agashe...