A Brief History of Industrial Psychology 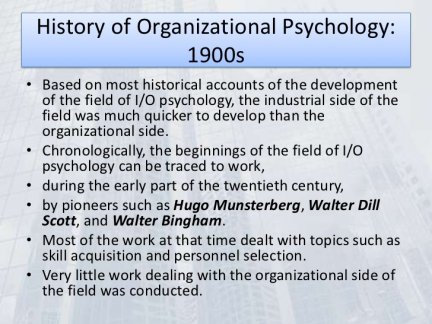 Industrial Psychology is almost as old as Psychology itself. Psychology came about in 1879 in the laboratory of Wilhelm Wundt in and William James at Harvard. Both of them were philosophers and physicians fascinated with the mind-body debate. The older discipline of philosophy could not alone deal with this debate, more room and new tools were needed, giving way to Psychology. Texts applying psychology to business first appeared in 1903; the first Industrial-Organizational (I/O) psychology text appeared in 1910 (Landy, 1997). It is believed that four men developed the ‘tone’ and ‘structure’ of I/O psychology: Hugo Munsterberg, James Cattell, Walter Dill Scott, and Walter Bingham (Landy, 1997).

Moore and Hartmann (1931) stated that while psychology moved into the educational and clinical fields, “no psychologist who respected his position dared venture into the office or workshop, ” and Hugo Munsterberg was the “first man to break the ice” (p4). It is speculated that Munsterberg was ‘forced’ to the field of I/O psychology because of with his Harvard colleagues (Landy, 1997). His book, Psychology and Industrial Efficiency, is regarded as the first I/O psychology textbook, published first in 1910. Krumm (2001) states that formal training in Industrial Psychology began when the book was published, while Landy (1997) asserts: “This book was the bible for the application of differential psychology in industry… later publications… did not replace the structure Munsterberg has put in place; they built on it” (p470). Munsterberg was primarily interested in personnel selection and use of psychological tests in industry.

Marvin D. Dunnette (30 September 1926 - 18 September 2007) was an American psychology professor and one of the key figures in the history of industrial and organizational psychology.
He graduated from the University of Minnesota with a degree in Chemical Engineering...

Stephen Colarelli was born in Denver, Colorado and grew up in Arvada, Colorado. His early years in Colorado left him with deep appreciation of nature and the outdoors. He received his B.A. in political science from Northwestern University, where he studied political...