The Psychology of Sports Fans 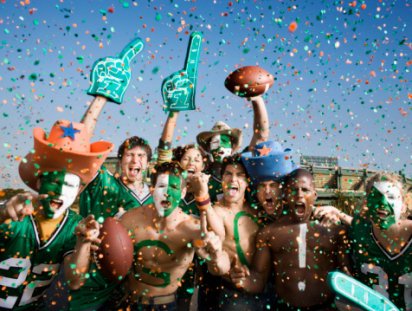 Ardent sports fans will hold onto the passion for their team no matter what. However, even the truest of the true fans may find that their faith is tested when things aren't going well for their beloved team. Social psychologists have identified two patterns of reactions that sports fans have to their team's performance. Here, we'll explore them as well as several related psychological concepts that apply to the behavior of fans, true and fickle.

First, let's look at "BIRGing." This term is not a typo of an eating disorder, but applies to the phenomenon called "Basking in Reflected Glory." When your team is doing well, you feel great. Research shows that on the day after a team's win, people feel better about themselves. They say "we" won, and by "we, " they don't mean themselves, personally. The closer you identify with the team, the more likely you are to BIRG. People who BIRG also are more likely to wear their team's regalia on the day after a victory.

In contrast, "CORFing" means that you "Cut Off Reflected Failure." Your team was trounced and now you want to distance yourself from them and their disgrace as much as possible. It's not "we, " who lost, it's "they." The last thing a CORFer wants to wear on the day following the team's loss are hats or shirts with the team's logo. This is the test of the true vs. fickle fan. It's the CORFers who are the fickle fans. Their identification with them rises and falls with the box scores. True fans, in contrast, will don jerseys, hats, and almost any item with the team logo no matter how poorly their team performs. True fans may feel dejected, but their heroes remain their heroes, even if somewhat tarnished by defeat.

These two aspects of the psychology of sports fans are great for understanding how fans, true and fickle, behave after victory and loss, but other concepts help explain why fans do what they do during games. Fans who actually attend games regularly display the social psychological phenomenon of disinhibition. They shout, yell, stand up, cheer, and high five strangers all around them. Even people who are ordinarily reserved and shy will explode in bursts of exhibitionism when surrounded by other people engaging in the same unrestrained excitement. Unfortunately, at times their disinhibition can create havoc as rowdy fans spill out onto the streets after a victory (or defeat) until subdued by local authorities. Needless to say, alcohol helps foster the disinhibition effect. You don't even have to attend the game to show the disinhibition effect. Sports bars provide a fine venue for the group mentality to take over and for alcohol to nurture the process.

The Science of Sports Addiction

The Duality of Fanhood and Morality in Sports

The Psychology Of A Sports Fan

Episode 3 "Psychology of a Sports Fan" with Pat Sangimino

Mathematically Alive: A Story of Fandom is an award-winning 2007 documentary film about fans of the New York Mets. Directed, produced and edited by Katherine Foronjy and Joseph Coburn, the film follows a wide variety of fans over the course of the 2005 and 2006...