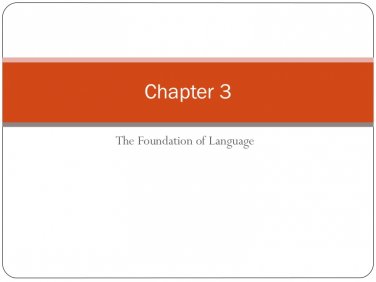 Language is a cognition that truly makes us human. Whereas other species do communicate with an innate ability to produce a limited number of meaningful vocalizations (e.g. bonobos), or even with partially learned systems (e.g. bird songs), there is no other species known to date that can express infinite ideas (sentences) with a limited set of symbols (speech sounds and words).

This ability is remarkable in itself. What makes it even more remarkable is that researchers are finding evidence for mastery of this complex skill in increasingly younger children. Infants as young as 12 months are reported to have sensitivity to the grammar needed to understand causative sentences (who did what to whom; e.g. the bunny pushed the frog (Rowland & Noble, 2010).

After more than 60 years of research into child language development, the mechanism that enables children to segment syllables and words out of the strings of sounds they hear, and to acquire grammar to understand and produce language is still quite an enigma.

One of the earliest scientific explanations of language acquisition was provided by Skinner (1957). As one of the pioneers of behaviorism, he accounted for language development by means of environmental influence.

Skinner argued that children learn language based on behaviorist reinforcement principles by associating words with meanings. Correct utterances are positively reinforced when the child realizes the communicative value of words and phrases. For example, when the child says ‘milk’ and the mother will smile and give her some as a result, the child will find this outcome rewarding, enhancing the child's language development (Ambridge & Lieven, 2011).

However, Skinner's account was soon heavily criticized by Noam Chomsky, the world's most famous linguist to date. In the spirit of cognitive revolution in the 1950's, Chomsky argued that children will never acquire the tools needed for processing an infinite number of sentences if the language acquisition mechanism was dependent on language input alone.

Consequently, he proposed the theory of Universal Grammar: an idea of innate, biological grammatical categories, such as a noun category and a verb category that facilitate the entire language development in children and overall language processing in adults.

Stages of Language Development: Pre-Linguistic and ...

Language Learning in Infants and Toddlers

6. How Do We Communicate?: Language in the Brain, Mouth

What is Cognitive Psychology? - Definition & Theories

nANO Psychology Defined and Established as a Branch of Psych

Does language shape how we think? Linguistic relativity ...

E-Prime is a software applications suite for conducting psychological and neuroscientific experiments, developed by Psychology Software Tools (PST) and first released in 1996. It offers control over almost every aspect of paradigm creation, and is temporally...