How are Psychology PhDs doing on the job market? 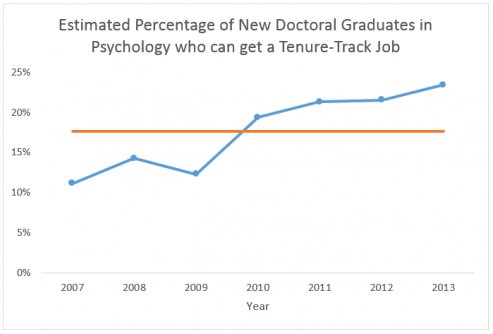 I am a reformed and rehabilitated ex-academic. In my previous life, I aspired to be a professor of Cognitive Psychology and Cognitive Science. I described my experiences in the academic stream in a series entitled The Grad School Gospels. In The Grad School Gospels I have been pessimistic about the value of most Psychology graduate degrees. I argued that the tenure-track job market for Psychology PhDs is devastatingly competitive and that for most Psychology sub-fields non-academic career paths are limited. That is, there often aren’t many jobs to go around that reflect one’s training and interests and that offer an income that duly compensates the massive investment that goes into earning a PhD.

A friend of mine, David Barner, who is a tenure track professor of cognitive psychology at the University of California at San Diego was sympathetic to the perspective I was offering, but provided credible evidence that Psychology PhDs were actually doing better than I thought. Most notably, he cited a blog post by Patrick Schnarrenberger Forscher (who, out of laziness, I will refer to as PSF), a Psychology PhD student at the University of Wisconsin at Madison. PSF reviewed National Science Foundation (NSF) science, technology, engineering and mathematics PhD employment statistics from 2006.

The numbers for Psychology PhDs looked better than I would have guessed. The unemployment rate among Psych PhDs was a mere 1% – much lower than the national average which, at the time, was 4.6%. What is more, only 1.3% of Psych PhDs reported being involuntarily employed outside of the field. Not bad at all. And the average income for Psychology PhDs across employment settings was $75, 000. So. There’s that… Nevertheless,

I Remain Pessimistic on the Value of Research-Only Psychology PhDs

Reasons for My Enduring Pessimism:

1. These data were collected before the economic crisis. While it’s true that economic crises have become a regularly recurring feature of society, the crisis of 2008 is often touted as the worst since The Great Depression. This hasn’t been your average crisis. Furthermore, responsive belt-tightening has not spared universities in general or psychology departments in particular.

2. This data appears to include sub-fields of Psychology with established non-academic applications. My pessimism with respect to the value of Psychology PhDs has always made exceptions for such domains as clinical and counseling psychology, industrial/organizational psychology, and human factors.

The Surprising Key To The Hidden Job Market

In recent years, contextual performance has emerged as an important aspect of overall job performance. Job performance is no longer considered to consist strictly of performance on a task. Rather, with an increasingly competitive job market, employees are expected...

Media planner is a job title in an advertising agency or media planning and buying agency. Media Planners are responsible for selecting media for advertisement placement on behalf of their clients. The main aim of a media planner is to assist clients in achieving...

Randy McKay is a commodities and futures trader, profiled in the book The New Market Wizards by Jack D. Schwager. In 1970 he parlayed an initial 2000 USD into 70,000 in his first calendar year and in just 2 years turned it into 1 million.
Randy was raised in a...